Searching For You by Jody Hedlund

Despite years on the run, Sophie Neumann is determined to care for two young children. She won’t abandon them the way she thinks her older sisters abandoned her. But times are growing desperate, and when she falls in with the wrong crowd and witnesses a crime, she realizes fleeing 1850s New York is her only option.

Disappearing with her two young charges into a group of orphans heading west by train, Sophie hopes to find safety and a happy life. When the train stops in Illinois for the first placement of orphans, Sophie faces the most difficult choice of her life.

Reinhold Weiss has finally purchased his own small farm. With mounting debts, a harvest to bring in, and past scars that haunt him, he’s in no position to give his heart away . . . but can he say no when his long-lost friend shows up on a nearby train pleading for his help?

I enjoyed this conclusion to the Orphan train series quite a bit. I loved how she told the hard parts, but had happy stories too. I found myself saddened for the wives, stuck in abusive marriages and realized how little things have changed at times.

The story was a happy one, but tainted with the reality of the hard facts. This author does an amazing job to make the story realistic and yet make you want to read more.

I obtained this book from the publisher through NetGalley. The opinions contained herein are my own.

This book is available for purchase in your local bookstores or through Amazon.

With you Always by Jody Hedlund

One of the many immigrants struggling to survive in 1850s New York, Elise Neumann knows she must take action to care for her younger sisters. She finds a glimmer of hope when the New York Children’s Aid Society starts sending skilled workers to burgeoning towns out west. But the promise of the society’s orphan trains is not all that it seems.

Born into elite New York society, Thornton Quincy possesses everything except the ability to step out from his brother’s shadow. When their ailing father puts forth a unique challenge to determine who will inherit his railroad-building empire, Thornton finally sees his chance. The conditions to win? Be the first to build a sustainable community along the Illinois Central Railroad and find a suitable wife.

Thrown together against all odds, Elise and Thornton couldn’t be from more different worlds. The spark that ignites between them is undeniable, but how can they let it grow when that means forfeiting everything they’ve been working toward?

This was not exactly what I expected from an Orphan train read as it was not your typical story. Or maybe it was, and I have read ones that are not like this before.

One thing that made me very sad, was seeing how the country has not changed in their actions in treating immigrants, the poor and orphans.  This tale brings to life the hardships that were facing the young people of this time and their desperation. Women were seen as a cheap commodity rather than what they were really valued for. The other sad reality in this book, was parents that manipulate their children with money. So, with those factors being a part of this historical novel, you get a happy ending, which many people in that time did not get,  but after much pain and suffering which was reality.

I really liked this book overall. I could see that some people might not like certain pieces of it, but it was real life and it was not pretty. But for that reason, likely recommend for high school age and adult.

If you want a good historical book to read, pick this one up.

This book was given to me by Bethany House for review. The opinions contained herein are my own.

To purchase, it is available on Amazon and wherever books are sold.  “With you Always”

An Uncertain Choice by Jody Hedlund 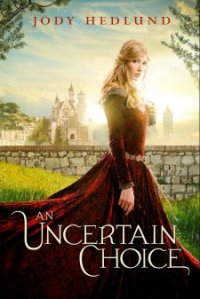 The first book in a new YA historical fiction series from bestselling author Jody Hedlund.

Due to her parents’ promise at her birth, Lady Rosemarie has been prepared to become a nun on the day she turns eighteen. Then, a month before her birthday, a friend of her father’s enters the kingdom and proclaims her parents’ will left a second choice-if Rosemarie can marry before the eve of her eighteenth year, she will be exempt from the ancient vow.

Before long, Rosemarie is presented with the three most handsome and brave knights in the land. But when the competition for her heart seemingly results in a knight playing foul, she begins to wonder if the cloister is the best place after all. If only one of the knights-the one who appears the most guilty-had not already captured her heart.

Medieval knights. Ancient torture. A lovely Maiden. What do all of these have in common? This young Adult read by Jody Hedlund claims ownership to all three.

Jody Hedlund has been known for historical adult romance. Her debut into young adult fiction has many positives going for it. Lady Rosemarie is determined to put an end to the Medieval tortures so common during this time period. This fact causes the story to be sprinkled with the brutal facts throughout, which may be a bit much for the younger teen reader. The book is written in first person, which can be off putting to some readers. Ms. Hedlund does with skill, weave a story, that takes place over only the course of one month.

I liked how history of the time period was expertly given throughout. It would be a book that you could have a high school student read for pleasure reading while studying this time period and it would appeal to both young men and women. While there is romance, it is done more according to the correct time period tradition. Women were forced to choose a husband for convenience often in that time, as Lady Rosemarie finds herself ordered to do in the beginning of this story.

While for me, the first person style of writing was a little less enjoyable, I am excited to see more fiction written during this time period. I plan on adding this book to a list of books to be used in my My Father’s World Rome to Reformation series. Readers will find that it is something that will bring discussion after reading it.

I was given this book for review from BookLook Bloggers. The opinions contained herein are my own.

All she’s ever wanted was a home. But stranded at Presque Isle port after their steamboat sank, Emma Chambers and her brother, Ryan, couldn’t be farther away from security. While Ryan at least can find work, Emma can’t even find a place to stay. An unlikely solution arises when the lighthouse keeper, who recently lost his wife and is struggling to raise his young son, arrives in town. A traveling preacher believes they might be the answer to each others’ problems, and after a hasty marriage, Emma is headed back to the lighthouse with this handsome but quiet stranger.

But nothing in her wandering life has prepared her for suddenly being asked to raise a child and keep a house. Struggling at every turn, Emma also suspects Patrick may be keeping something hidden from her. In town she hears whispers about strange circumstances surrounding his previous wife’s death, and it seems as though Emma’s answered prayer for a home and family may actually be something much more dangerous.

The sweetness of this love story found me wanting to go back again to this book. Emma believed she was flawed, by simply being unmarried at an older age. Patrick felt he was flawed from sins of his past. When the life circumstances of the two throw them together into a marriage of convenience, the traditional story somewhat occurs. Pirates, lighthouses and a mysterious woman complicate matters. Emma seeks to know the truth, yet longs for friendship and happiness.

I found that the story bordered a couple of times on a little too much detail in the romance department. It felt like I wanted to turn my head away a couple of times, as it was just too private or sacred of a moment. That is a sign of a skilled writer, which Jody Hedlund is. However, if you are sensitive to those types of scenes or wish to avoid them, just a heads up. They are not throughout, and you would be able to skim over them if they make you uncomfortable. The story of developing love, courting your wife after you are married, and taking care of an orphaned child was very skillfully told, even though the story is as old as time. I enjoyed the history of the lighthouses, the mystery of the pirates, and working to solve the mystery of Patrick’s background.

This book was provided by NetGalley and the publisher for review. The thoughts contained herein are my own.

Captured by Love by Jody Hedlund

A voyageur and a young woman swept up in a time of upheaval and danger
discover firsthand the high price of freedom.
The British Army has taken control of Michilimackinac Island and its fort, forcing the Americans to swear an oath of loyalty to the crown in order to retain their land. Pierre Durant is a fur trader who returns after being away from the island for years, only to find the family farm a shambles and those he cares about starving and at the mercy of British invaders.

Torn between the adventurous life of fur trading and guilt over neglecting his defenseless mother, Pierre is drawn deeper into the fight against the British–and into a relationship with Angelique MacKenzie, a childhood friend who’s grown into a beautiful woman. She now finds herself trapped by the circumstances of war and poverty, and the cruelty of her guardian, Ebenezer Whiley.

As tensions mount and the violence rages on, Pierre and Angelique must decide where their loyalties rest and how much they’ll risk for love.

This book had a different feel than some of the historical romantic fiction that I find that I pick up. This book, set during the Revolutionary war period, focuses more on the fur traders lifestyle, and a young woman trapped in an abusive lifestyle through no fault of her own.

Ms. Hedlund tells the tale without giving graphic details, but paints a clear picture of the pain the young woman would have suffered at the hands of someone that should have cared for her. As with some of her other books, you can draw a parallel to modern day society, and how not too many things have always changed. The romantic thread of the story is very moving, as Angelique is not your typical heroine, but you can see inside of her soul.

I found this to be a unique read, especially for the time period, without so much the focus being on the war time and the upheaval in the country, but the unique relationships and hardships that faced women in that time.

This book was provided for me for review by Bethany House Publishers. The opinions contained herein are my own.